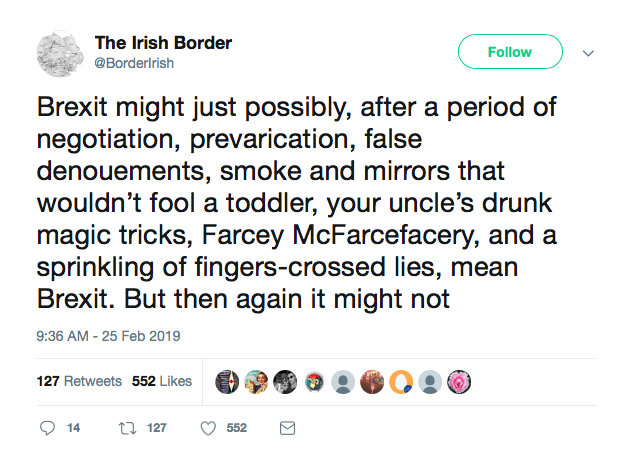 For over a year the most incisive comments on the whole Brexit fiasco have come from the wonderful Irish Border Twitter account. The anonymous writer (I am the border between Ireland and Northern Ireland. I’m seamless & frictionless already, thanks. Bit scared of physical infrastructure) provides a running commentary on the absurd pronouncements of ‘experts’ and politicians in London, Brussels and elsewhere as they try to find yet another solution to the backstop conundrum. (The answer is, there isn’t one.)

Another person who understands all this is the comedian and TV presenter Patrick Kielty, who comes from Co Down. His analysis of the absurd situation was published in a terrific article in Tuesday’s Guardian, with his credentials summed up in a chilling three sentences at the foot of the page: “His father was killed by loyalist paramilitaries in 1988. Those responsible were later released under the Good Friday agreement. His documentary, My Dad, The Peace Deal and Me, exploring the legacy of the Belfast agreement won a 2018 Grierson award.”

Keilty writes eloquently how for the DUP (“the political wing of the Old Testament”) Brexit is about “proving they’re biologically British, not adopted. It means the party will always order what Johnson and Farage are having but, unlike them, actually eat it.” However, as he adds, the irony is that their hardline position could mean that they end up by jumping off the cliff, thereby causing a hard border, a border poll in Northern Ireland and the perfect economic storm where it might lose that vote.

It’s worth reading Kielty’s article in full, but here is a substantial quote:

As the prime minister Maybots her way through the charade of alternative arrangements, there’s only one thing you need to know – there are no workable alternative arrangements. If there were, you’d have heard of them by now. The details of this technological masterpiece would already be a double-page spread in the Daily Mail with Rees-Mogg mocked up as Alan Turing under the headline “Enigma cracks Enigma – spirit of Bletchley takes back control”. If an alternative arrangement that worked actually existed (or was likely to exist in the next couple of years) Brexiteers would have already accepted the backstop, knowing they could easily replace it with their idea during the transition. The fact that they won’t bet on themselves tells you all you need to know about what they have in the locker.
… All of this could have been avoided if the majority in Northern Ireland had been listened to during the referendum campaign. But as Nigel Farage and Johnson trumpeted their migrant-free magic kingdom, we were Kevin in Home Alone – only remembered at the baggage carousel after the plane had landed. It’s why the minutes of the first meeting between Michel Barnier and David Davis will never be released. “So, what do you propose for your land border with Europe?” Polite laughter. “We have a land border with you guys?”
Even at this late stage, it remains the unanswered question – how can you take back control of your borders when the only land border you have can’t be put back in place? The fact that more than 70% of people in Northern Ireland voted to give up control of that border via the Good Friday agreement so they could live in peace remains totally ignored.
When Conservatives say they care about Northern Ireland, they actually just mean the freehold. Like a stable block with planning permission, they know the extra square footage adds value but they’ve no intention of actually developing it. Just as long as they can see it from the big house, they’re happy. As for those who live in the stable? If Brexit has proved anything, it’s that many Tories don’t give a stuff about the people of Northern Ireland – not even the unionists. If they did, they wouldn’t dream of a hard Brexit because it only guarantees one thing – a border poll.
That’s one that will be decided not by Sinn Féin or DUP votes, but by the moderates in the middle – nationalists who once felt Irish enough post-Good Friday agreement and those pro-European unionists applying for Irish passports. The inevitable economic downturn and border circus of a hard Brexit might just be enough to swing those floating voters and Northern Ireland out of the union. So, why would any member of the Conservative and Unionist party take that risk? Because no matter what they say in public, they’ve never honestly believed Belfast is just like Finchley.

As a Brit who has lived in Dublin for twenty years, I completely agree. Most people in Britain have some vague notion that Ireland is that other island on the left hand side of the weather map – the bit where the temperature symbols only appear in the top corner. But they can’t tell the difference between the accents of Eamonn Holmes and Louis Walsh and if they work in a call centre or mail order firm they inevitably say “Is that in Southern Ireland?” when I give them my address.

These are the kind of people who couldn’t give a toss about the unintended consequences of the Brexit decision. They just want the politicians to “get on with it”. They voted to “take back control” and the fact that taking back control could well result in the break up of the whole United Kingdom is a consequence that they just haven’t thought through.

But we are not allowed to disagree with them because they represent “the democratic will of the people”. Never mind that the slim majority in 2016 was brought about by a perfect shit storm: lies and chicanery from the Leave camp and ineffective support from the Labour leadership for the Remain campaign. This has led to the terrible position of there being a small bunch of  Labour MPs who voted Remain themselves but, because a majority in their seats voted Leave, will probably support a Tory Brexit. It will be a sad, sad day if they are the ones who – along with the DUP – finally carry Theresa May’s disastrous deal over the line.