The three Labour leaders who have won general elections since 1945

There is no better guide to the completely bonkers attitude of Jeremy Corbyn and his supporters, who are on course to lead the British Labour Party to disaster in five weeks time, than this article written on Friday in the Independent.
It was written by a Momentum supporter called Rachel Godfrey-Wood, who obviously remains convinced by the Dear Leader.

As a Momentum member, I’m not disheartened by Labour’s losses in the local elections.The local election results are coming in, and the pundits are predicting doom for Labour in next month’s general election. I could have written that line before we even knew the results – in fact I did – because it relies on two hard facts that were never going to change. Firstly, that these local elections are not nationwide and exclude pretty much everywhere that Labour’s vote share has been improving (for instance, there were no elections in London). Secondly, that large sections of the media are committed to building a narrative against Jeremy Corbyn.
Labour’s army of campaigners were never drawn to the idea of giving up their evenings and weekends by good polling numbers, and they won’t be put off by the odd setback in county council elections.
They have been inspired by a vision for a radically different kind of society – an alternative to the rigged political and economic system in which nurses are using foodbanks and four million children are living in poverty.
It’s the people versus the establishment, and for the first time in my lifetime we have, in Jeremy Corbyn, a potential prime minister who is really on our side.

This guff is symptomatic of the failure to face up to the reality that in seizing control of the party these Momentumites have elected a leader who is so mistrusted by the ordinary Labour voter that they are pushing a once-great party with a proud history to certain doom.

Here is what the Observer’s Andrew Rawnsley thinks:

There are only two people in the country still trying to sustain the fiction that the general election is competitive. One is Theresa May. “I don’t take anything for granted,” she says, with the most implausible humble-bragging. The other one playing pretendy politics is Jeremy Corbyn, who has to maintain the line that four weeks of further exposure to him, Diane Abbott and John McDonnell will miraculously change the country’s estimation of their suitability to form the next government.
After Labour had been hammered in areas of Britain that the party had controlled for decades past, he blustered that he was “closing the gap” with the Tories, before going on to claim that he was “loving every bit” of this hopelessly unbalanced fight. I dare him to say that to the faces of the hundreds of decent, loyal, hard-working Labour councillors who have just been fed into the jaws of the Tory munching machine.

As Labour stares into the jaws of disaster, it is essential to grasp that there was nothing pre-ordained about this rout. The electoral evisceration of Labour wasn’t written in the stars. Defeat is not to be blamed on the whims of the gods or the tides of the moon. This calamity can’t be put down to the caprice of fate. The Tories were handed this opportunity to smash their way to a big majority because Labour made terrible choices and is under abysmal leadership.

Unfortunately it looks as though Labour will pay the price, and this cost will be expressed not just by the many good Labour MPs who, unfortunately, will lose their seats on 8 June. The greater burden will fall on the people of the United Kingdom of Great Britain and Northern Ireland. For this could well be the last time when an election will be held when all its constituent parts will vote for the same Parliament. And it could condemn the Labour Party itself to electoral oblivion.

Looking on this from abroad, I can only despair. 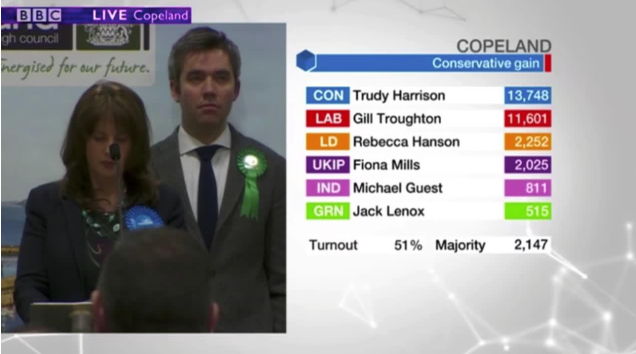 There is nothing a British political nerd likes more than a parliamentary by-election, which made last Thursday’s late night TV watching such compulsive viewing. There was some debate about when was the last time a Government party won a by-election from the principal opposition party. The simple answer is the Mitcham and Morden by-election in 1982, but this had the unusual circumstance of being the voluntary resignation of the sitting MP, Bruce Douglas-Mann, when he left Labour to join the SDP.
The other times when the Government party has won by-elections are listed below, where you can see that there is a case that can be made that this was in fact the worst defeat for a principal opposition party since Worcester in 1878.
So that is the state the Labour Party is in, 2017 style. As someone who worked on several Labour campaigns where we won with stunning majorities (think Mid-Staffordshire in 1990) I find this most depressing.