The summer of 1995 was a pretty memorable one. In June, we travelled from London to a holiday cottage in Kerry in Ireland, along with my brother, sister in law and their one year old daughter. It was too hot for the locals. One told a local radio phone in: “we Irish aren’t designed for heat. We’re not like the Japanese. It’s so hot I have to have a wash nearly every day”. We introduced our two year old son to a clear blue sea, ate fresh salmon sandwiches, drank cold Guinness and watched the famous South African victory in their home Rugby World Cup final on a tiny TV.

Meanwhile, back in London, John Major announced in his “put up or shut up” speech that he would stand for re-election as Conservative Party leader to stop the endless speculation about whether he should resign or not. After a very brief campaign, he beat the only person who ran against him, John Redwood, by 218 votes to 89.

Still in the world of politics, I did some freelance work for the Labour candidate in the Littleborough and Saddleworth by-election, which took place on 27 July, but I was mainly busy in the small editing and design business that I had set up with my old colleague Lliane Phillips. Life there was going well; we worked from a small office on the top floor above a shop in Upper Street – voguish enough then, balls-achingly on trend now. Under the roof, we got boiling hot in summer and froze in winter. By then we had a couple of Macs. One was the pizza box style LC475, small enough to be portable, the other a Performa. We had both become deft users of QuarkXPress.

Even though we were firmly in the Apple camp, we could hardly not have noticed the release by Microsoft of its new operating system, Windows 95, described this week by The Register in a piece marking its 25th anniversary as “arguably the most consequential event in modern computing history”. I remember that the hype even reached the cartoon pages of the mainstream press, with Gary Trudeau drawing a hilarious sequence of Doonesbury cartoons which ran in the Guardian for a week or more.

Three of the Doonesbury series are shown above. In a search for them on Google, I came across the first two in a guide to the installation of Windows 95, a glorious web page set up by a Florida company which doesn’t seem to have been updated since it was created.

The Register article also has a link to a much under-appreciated resource, an hour-long (!) video guide to Windows 95 on YouTube, where your hosts are two fresh-faced young actors, Jennifer Aniston and Matthew Perry.

As if to remind us where we are in the evolution of computing history, at one point the video proclaims Windows 95 as the “on-ramp to the Information Superhighway”. The Internet Explorer versus Netscape battle was about to start.  Google’s revolution of search was still three years away.

And all this was just 11 years after Apple’s 1984 campaign that introduced the Macintosh personal computer. The greatest TV commercial ever, according to Advertising Age. How time flew.

For ages I’ve had it in mind to write one of those ‘it wasn’t like that when I was young’ pieces about the history of desktop publishing. But when I turned on the TV on Monday afternoon to catch up on the score in the snooker World Championship match between Mark Williams and Ronnie O’Sullivan, I didn’t expect to spend the next hour chundering around the internet. The result was I came across the modern manifestation of a software program which I thought had long bitten the dust.

There above is Ronnie, in all his open-mouthed glory, snapped by me off the telly and sporting a sponsor’s badge proclaiming the word ‘Publisher’. I couldn’t think what that referred to, even though over the years, there have been a number of programs called with that name, the most notable being that belonging to Microsoft. According to this Wikipedia list, Ventura Publisher and Timeworks Publisher have also popped out of the floppy disk drives of history.

But it turns out that Ronnie O’Sullivan is now sponsored by the Nottingham-based firm Serif (Europe) Ltd, makers of a suite of programs called Affinity Publisher, Affinity Designer and Affinity Photo. Priced at around 50 quid each, they offer a reasonable alternative to the gouging subscription-only model now the only option from Adobe and its Creative Suite. (A nightmarish price of €61.49 a month for a single freelance designer.) The About Us page explains that the company goes back to the early 1990s and its original DTP program PagePlus.

As I still have the full Adobe CS4 bundle, and because I don’t do a lot of DTP work anymore, I don’t really need to upgrade my software, but I have to say that Designer does look like an impressive, professional-level program, and I might be tempted if I were still in the market. 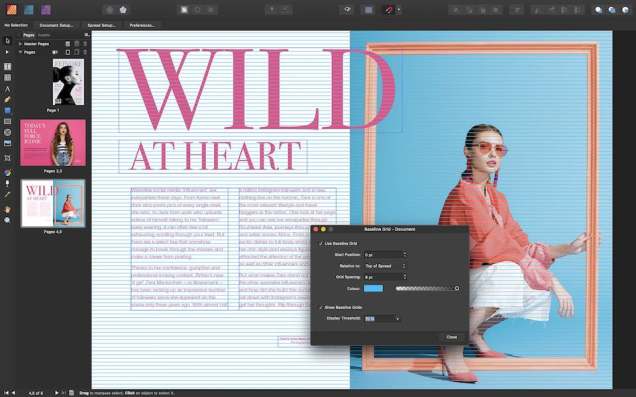 It seems as though it has all the bells and whistles a hip young designer would need, just as long as they can tear themselves away from the snooker. And if Ronnie O’Sullivan goes all the way through to a Sunday late-night final session, it will surely have been a sponsorship deal worth making.

There are many tributes today to John Hume, whose death was announced this morning. The President of Ireland, Michael D Higgins, summed up his life in a well-crafted statement:

‘All of those who sought and worked for peace on our island of Ireland, and in the hearts of all, will have been deeply saddened by the passing of John Hume, Nobel Peace Laureate and Statesman.

John Hume, through his words, his astute diplomacy and willingness to listen to what was often difficult to accept but was the view of the ‘Other’, transformed and remodelled politics in Ireland, and the search for peace, with a personal bravery and leadership informed by a steadfast belief in the principles and values of genuine democracy.

John’s deep commitment to these values and his practical demonstration of tolerance and social justice, oftentimes in the face of strong opposition and tangible threats to his person and his family, asserted the fundamental principles of democracy. He and those others who helped usher in a discourse that enabled a new era of civil rights and responsive government that few would have thought possible, have placed generations in their debt, have been a source of hope.

That his efforts were recognised through the awarding of the 1998 Nobel Peace Prize brought great joy not only to his people in Derry, his colleagues in politics, particularly in the SDLP, but to a wider global set of colleagues and fellow advocates for peace abroad who held him in the greatest esteem and admiration.

Mar Uachtarán na hÉireann, as President of Ireland, may I say how deeply grateful we all should be that we had such a person as John Hume to create a light of hope in the most difficult of times.

It was Seamus Mallon, that other great statesman and courageous peace seeker and builder, who observed: “Inside was a man who had something big to do. There is a greatness about his political life in what he did and what he helped to do. I would put him in the same breath as Parnell and Daniel O Connell.”

We are grieving in this difficult year 2020 for two great apostles and seekers of peace.’

A fleet-footed move by the London Review of Books sent a remarkable 1989 article by Hume into their readers’ inboxes this morning. I’ve printed its 3891 words to read more carefully later but this trenchant paragraph stood out at first glance, and shows powerfully what he was up against at the time. It demonstrates the personal courage Hume showed in telling truth to the republican ‘movement’, armed to the teeth as they were:

For people who proclaim their Irishness and their pride in Ireland so loudly they are remarkably lacking in both the self-confidence and the guts to sit round and talk with their fellow Irishmen as a way of persuading them that this vision of Ireland is the best one. In particular, their decision to use guns and bombs to ‘persuade’ their Protestant fellow Irishmen is not only an extreme instance of lack of faith in their own beliefs or in the credibility of these beliefs: it is an indication of appalling moral cowardice and a deeply partitionist attitude. For its real effect is to deepen the essential divisions among the Irish people. There is not a single injustice in Northern Ireland today that justifies the taking of a single human life. What is more, the vast majority of the major injustices suffered not only by the Nationalist community but by the whole community are direct consequences of the IRA campaign. If I were to lead a civil rights campaign in Northern Ireland today, the main target would be the IRA. It is they who carry out the greatest infringements of human and civil rights, with their murders and bombings, their executions without trial, their kneecappings and punishment shootings. The most fundamental human right is the right to life. Who in Northern Ireland takes the most human lives?

(Incidentally, kudos should go to the LRB whose Diverted Traffic daily emails have been a welcome breath of air in these difficult times.)

A further demonstration of the international esteem in which Hume was held is shown by this photograph from 2014, taken when Congressman John Lewis, who also died in the last few weeks, visited Derry and walked arm-in-arm with Hume across its Peace Bridge.

Hume did not do many public engagements at this stage in his life, but he made an exception to meet Lewis. That these two giants of the non-violent approach to politics should die with days of each other is a terrible loss to democracy. We must do all we can to ensure that their legacy lives on.