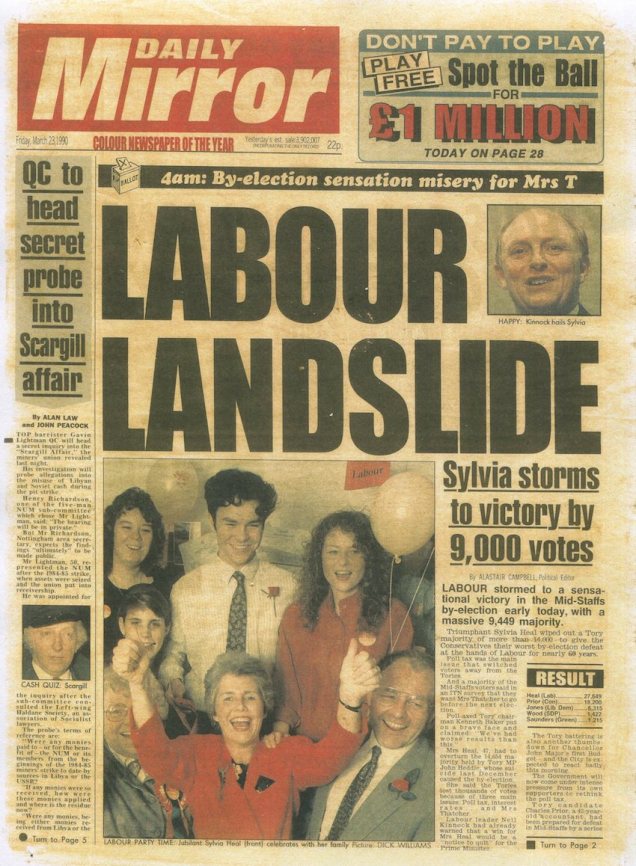 Front page of the West Midlands edition of the Daily Mirror, Friday 23 March 1990. The proprietor, Robert (Captain Bob) Maxwell, ordered a special late edition for the region with a front page update containing the result of the Mid Staffordshire by-election, which was declared at about 4am. The story appeared under the byline of the then political editor, Alastair Campbell. The photograph had in fact been taken earlier in the day. Back row, left to right, are London Labour activist Cathy Deadman, wife of Alan Deadman, the print union official mentioned below, and Sylvia Heal’s son and daughter, Gareth and Joanne. The young woman in the middle row was an American student working as an intern in a Labour MP’s office. Front row shows Sylvia Heal’s mother, Ruby Fox, Sylvia herself and her husband, Keith Heal.

Today, Sunday 22 March, marks the thirtieth anniversary of Labour’s historic victory in the Mid- Staffordshire by-election, the day in 1990 when Sylvia Heal overturned a Tory majority of 14654 from the previous general election to win by 9449 votes. The swing of 21.4% from Tory to Labour was a record at the time. I’m proud to say that I was there, doing my small bit to help the campaign.

This was actually the second of the four Labour gains from the 1987-1992 Thatcher/Major Tory government, which had a dismal record in by-elections. Altogether in that period, there were 21 contests and the Tories only won one, which was the very first seat they defended at Richmond in Yorkshire. This was caused by the appointment of Leon Brittan as a European Commissioner, and resulted in the election of William Hague. His majority was however slashed from 19576 to 2634.

The Tories went on to lose all seven of the other seats they defended over the following three years – four to Labour and three to the Lib Dems. The four Labour gains are shown below in pink in this screengrab from Wikipedia, and I played a part in all of them. 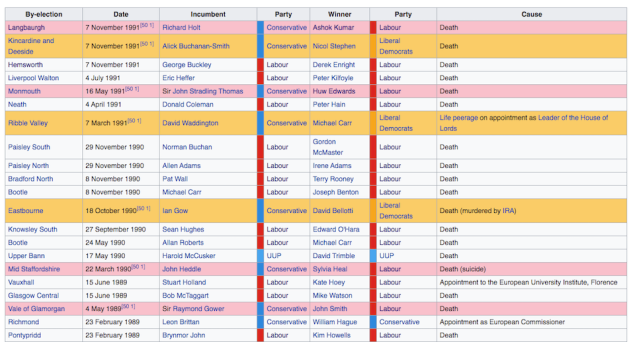 At the time, I was working at Labour Party headquarters in Walworth Road, London. My job title was nominally campaign writer/sub-editor but in effect, because of the advent of the new-fangled technology of desktop publishing, I was also a designer of campaign material. When a by-election occurred it was the practice for Head Office to post a number of staff to augment the regional team who ran the campaign. These usually included a press officer, a researcher and someone like me, whose job was to produce the campaign literature and other publicity material. Depending on the amount of effort the national party thought necessary, a number of staff from other regional offices would also be deployed as local organisers, computing staff, campaign aides and other roles.

My first outing in this job was actually in February 1989 in Richmond, where I succeeded in spending quite a lot of the party’s money for very little reward when the Labour candidate trailed in a distant fourth with only 2591 votes. The Vale of Glamorgan by-election followed a few months later, in May 1990, but because it coincided with the local elections and the run up to the Euro elections, a freelance was sent off to work on this instead. However, he had to come back to London over one weekend and because a local Sunday newspaper was going to publish an opinion poll, which we expected to be favourable to Labour, I was despatched to Wales to write and produce an instant overnight leaflet. This I did, and it was printed on a small litho machine operated in a back room by an NGA official called Alan Deadman, who had also been seconded for the campaign. Labour’s John Smith (not that John Smith) won the by-election with a majority of 6028.

Seven months later, shortly before Christmas, the Tory MP for Mid Staffordshire John Heddle committed suicide, which meant there would be a by-election in his seat. At first sight, this didn’t look particularly promising for Labour: a Tory majority of nearly 15,000, based on the prosperous cathedral city of Lichfield. But there were areas where Labour could expect to do well, such as Rugeley, a town with 20,000+ voters, which still had a colliery (although it would close less than a year later) and a power station. Also, the Tories under Margaret Thatcher were proving ever more unpopular, and seemed determined to push through with their disastrous Poll Tax proposal.

Neil Kinnock and the leadership decided to push for maximum effort in this campaign, and were backed by the Shadow Cabinet and the party NEC. I asked my boss, Peter Mandelson, if I could take the publicity material job and he agreed. So I packed up one of the only two computers we had in my department and set off for Rugeley. The local party had little experience in running a big campaign but were keen, and they selected an excellent candidate in Sylvia Heal. She wasn’t local –Welsh born, and now living in Surrey – but she had the kind of personality that would go down well with the voters.

So it proved. Labour members flooded in from all over the country. We had excellent support from the unions, the European Parliamentary Labour Party and MPs from the House of Commons. The candidate’s minder was Peter Snape, the West Bromwich MP, a legend in his own lunchtime, who successfully prevented a potentially hostile Daily Mail reporter from asking difficult questions by getting him so drunk that he had to flee back to London to recuperate. The agent was the ever urbane Fraser Kemp, a Sunderland native who was the party’s West Midlands organiser. He went on to become the MP for Houghton and Washington East. I was kept busy producing leaflets and publicity material, much of which was printed in the back of the headquarters by the same Alan Deadman of the NGA.

The campaign went like a dream. The Tories were in complete disarray, trying to defend a Poll Tax which they obviously didn’t really believe in. The newly-formed Liberal Democrats were hampered by having a rival candidate from the rump SDP. Two opinion polls predicted a stomping majority for Sylvia Heal. Neil Kinnock arrived, and a local supporter flew him and Sylvia around in a helicopter. I was deputed to escort Labour supporters Prunella Scales, Timothy West and a then very popular EastEnders actor (whose name I have now forgotten) on a celebrity visit. We eventually won by almost 10,000 votes and Sylvia went on a walkabout the following day. I was able to buy a copy of the special West Midlands edition of the Daily Mirror, shown at the top of this post, and I pinned it up over my desk when I got back to Walworth Road.

Thatcher’s time in office did not have much longer to run. In the autumn, there were several more by-elections. The Lib Dems took a seat off the Tories in Eastbourne in October and then I was involved in a tricky defence of a Labour seat in Bradford North, where the MP who had died was in Militant. The party selected a respected moderate councillor, Terry Rooney. He took his seat on 13 November 1990, the day Geoffrey Howe made the resignation speech which precipitated Margaret Thatcher’s downfall.

John Major became Prime Minister and although the Tories dropped the poll tax and got a bounce in the polls they continued to do badly in by-elections. The Tory MP for Monmouth died in March 1991, so another one was called. Labour selected a candidate called Huw Edwards (not that Huw Edwards) and we won the by-election relatively easily. A Tory majority of 9530 was converted to a Labour majority of 2406. Once more I produced all the party literature, some of which can be seen in this Youtube video compilation.

Finally, in the autumn of 1991, we were plunged into another by-election campaign when Richard Holt, the Tory MP for Langbaurgh on Teesside, died suddenly on 20 September. The local party had already selected a Middlesbrough councillor, Ashok Kumar, as its candidate for the forthcoming general election. He was confirmed as the by-election candidate and duly triumphed with a majority of 1975, overturning a Tory majority of 2088. This film on Youtube by reporter Steve Richards was part of the BBC coverage of the result. It’s nice to see my friend the late Annie Longley from Chepstow, who later worked for the Co-operative Party, in the Kumar entourage on the campaign trail. It was very sad to hear of the death of Kumar himself at the early age of 53 in 2010.

A few months later, in April 1992, Labour lost all four of these seats in the General Election. All four MPs, however, returned to the house in the Blair landslide of 1997. The Mid Staffordshire seat had been abolished by then, but Sylvia Heal won the target seat of Halesowen and Rowley Regis.

Mid Staffordshire was a great experience, and probably the most exciting campaign I ever worked on. Labour’s by-election total gain of four in the 1987-1992 parliament is second only to the five gains it made between 1959 and 1964. It’s a winning habit the party could well do with today.