How the BBC would like you to see how it imagines its new bright young things.

I read about this concept first in Private Eye (No 1450) but the only online mention I could find is this post on Bill Rogers’s blog. Private Eye has a long history of picking up what it calls “Birtspeak” phrases used by BBC management, but this was a new one on me. The idea of “remapping” BBC journalists was announced in an email to local radio staff from Chris Burns, head of Audio and Digital, BBC England.

I predict a great future for the concept of remapping people, before it joins “talent acquisition”, “creative pool” and “onboarding” on a list of HR Buzzwords you really need to ditch.

My daily trip to the Phoenix Park has become very complicated. A huge central area has been cordoned off to enable the construction of a venue big enough to hold the expected 500,000 people who will attend a Mass to be celebrated by the Pope. This is taking place on Sunday 26 August.

The result of all this activity is that I have had to move my dog-walking start point from the Papal Cross car park to the one on Glen Road. This happens to be the area where most of the females and this year’s fawns from the park’s fallow deer herd hang out. This part of the Fifteen Acres is where the deers would normally be at this time of the year, but they are confined to the eastern part of the space by the temporary fence.

My enforced move has meant that I am much closer to the dozens of people who turn up every day to feed the deer, something that is actually prohibited by the park authorities. Every day I see several bunches of deer, each surrounded by tourists proffering food – mainly carrots and apples. This activity is bad enough (according to the Wild Deer Association of Ireland, even carrots and apples are not good food for deer) but then some of the feeders make things worse by leaving their litter behind.

The other day, I saw one hind with something shiny in its mouth. It was too far away for me to get a photograph, and it dropped the object as I got closer. But this is what I found when I got to the point at which it had been grazing: 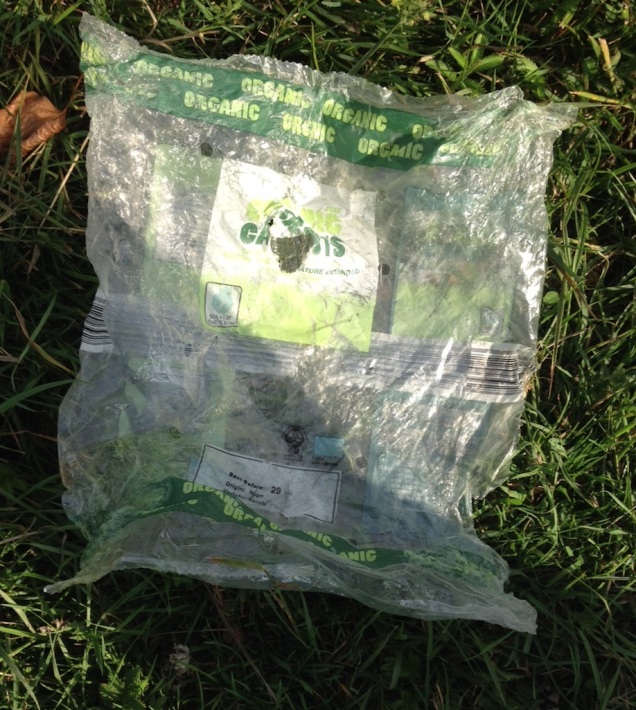 There was a major outcry about what we are doing to our habitat when the Blue Planet TV programme recently broadcast the effect of plastic pollution on the species with whom we share our earth. And yet people still leave their rubbish behind in a field where wild animals graze.

Looking around the interwebnet for material on deer feeding in the Phoenix Park I came across some incredible examples of general idiocy. Here is a man feeding a buck with some sort of biscuit:

And here is ‘Dublin-based model’ Brittany Mason (whoever she is) delighting her 77,000 Instagram followers with her cute picture. She apparently ‘made friends with Bambi today’, carefully remembering to add her sponsor’s hashtag to the post.

I took these examples from a very good piece posted in 2016 on the Dublin Inquirer site, and there are many more horrifying pictures there.

One of the reasons why the trend has grown is because tourist guides and social media are encourgaing the practice. Here are a couple of examples I turned up: 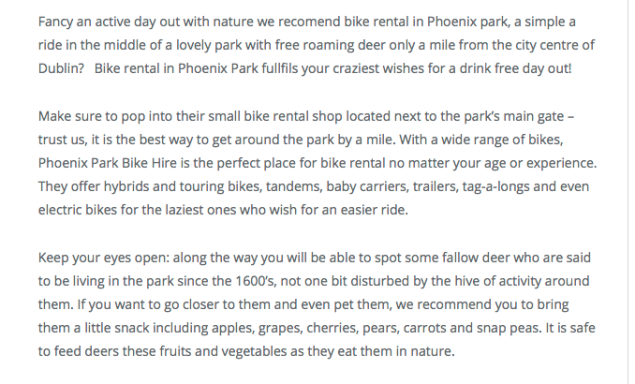 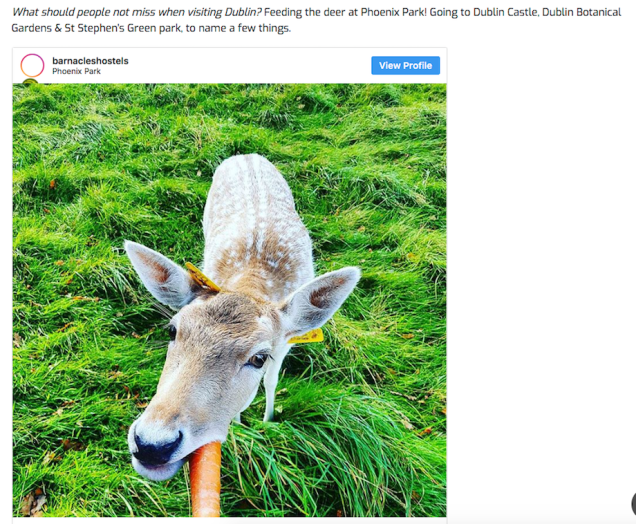 Some proper research needs to be done on the effects of this rapid increase in feeding. According to a recent Mooney Goes Wild radio programme, where one Spanish student was found to be giving the deer popcorn, Laura Griffin from UCD is looking at the subject. I hope that this will be published soon, and perhaps then the OPW will take a much more active stance on prevention.

In the meantime, maybe people will realise that the deer are wild and really shouldn’t be approached. Particularly during the annual rut, which will start in a few weeks time. Here is a piece which appeared in the Irish Sun, written in the usual sniggery language we have grown to expect.