The moment I saw this picture in The Guardian a couple of weeks ago I knew exactly the place from where the shot had been taken, before I had even looked at the caption. It’s in the Phoenix Park near the Magazine Fort car park. Although I’ve now changed my usual starting point for my daily dog walking route, this tree is only a few dozen yards from the car park which I used to use. The tree’s shape, along with the worn-down path and the curve of the two small hills, are unmistakeable. It must have also made a real impression on the photographer, Finn Richards, because although in real life it’s quite small he describes it as standing “guard over the hill that it sits in front of.”

Because of the restrictions, I wasn’t able to get to the location to check whether my memory was accurate until today. All the smaller gates to the Phoenix Park are currently closed to cars, so I had to leave mine outside and walk in – but there the tree was, just as I recalled.

I haven’t got quite the right angle – it’s difficult comparing the screen of an iPhone with a scrumpled sheet of paper, especially when a dog demanding that a ball be thrown is also present – but I’m sure it is the same tree. I took another shot from a different angle, which shows its position relative to the Magazine Fort.

Looking more carefully at the Guardian’s shot today, I was slightly puzzled by the state of the grass – long, dry and sun-bleached. However, when I checked Finn Richards’s page on Instagram, I see that it was taken in July 2018, which explains it.

There is a reasonable chance that exercise and other restrictions will be relaxed slightly more next week. This could mean more regular trips to the park – something that both the dog and I are already looking forward to.

Yet more underwhelming signage in the Phoenix Park about feeding the deer. These ones look as though they were probably produced by staff in the Laboratory of Wildlife Ecology and Behaviour at University College Dublin, as they carry the Laboratory’s logo. It’s a shame that whoever designed them never went to the first year Information Design class which I used to run at UCD. (I see that this course is still being offered, by the way, although it is now under new management.) 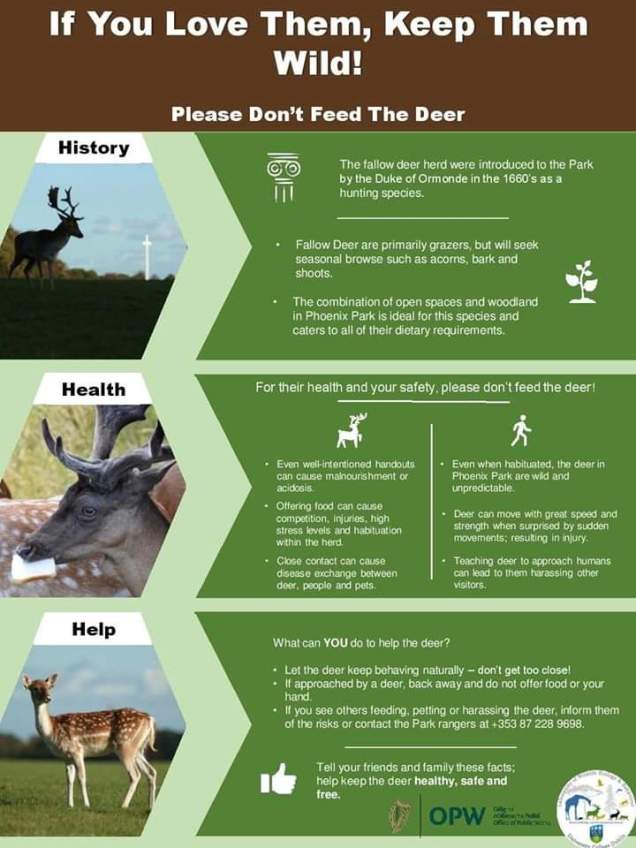 There is a much better piece of design on the Laboratory’s Twitter feed, shown above, but it’s not clear whether this is meant to be a poster or a one-off exhibition panel (I suspect the latter). The typography and the use of clipart could be improved, but overall the message is clearly presented. The Twitter feed has a lovely little film clip showing the first of this year’s fawns, by the way.

Meanwhile in more Phoenix Park news, a consultation process over a new set of proposals for its future has just ended. The 18 page executive summary contains the usual guff about enhanced visitor experiences (including a possible funicular railway) and potential retail areas but not a single word about the lack of recycling facilities which means that thousands of plastic bottles and aluminium cans are left strewn in the open or dumped in rubbish bins every day.

My daily trip to the Phoenix Park has become very complicated. A huge central area has been cordoned off to enable the construction of a venue big enough to hold the expected 500,000 people who will attend a Mass to be celebrated by the Pope. This is taking place on Sunday 26 August.

The result of all this activity is that I have had to move my dog-walking start point from the Papal Cross car park to the one on Glen Road. This happens to be the area where most of the females and this year’s fawns from the park’s fallow deer herd hang out. This part of the Fifteen Acres is where the deers would normally be at this time of the year, but they are confined to the eastern part of the space by the temporary fence.

My enforced move has meant that I am much closer to the dozens of people who turn up every day to feed the deer, something that is actually prohibited by the park authorities. Every day I see several bunches of deer, each surrounded by tourists proffering food – mainly carrots and apples. This activity is bad enough (according to the Wild Deer Association of Ireland, even carrots and apples are not good food for deer) but then some of the feeders make things worse by leaving their litter behind.

The other day, I saw one hind with something shiny in its mouth. It was too far away for me to get a photograph, and it dropped the object as I got closer. But this is what I found when I got to the point at which it had been grazing:

There was a major outcry about what we are doing to our habitat when the Blue Planet TV programme recently broadcast the effect of plastic pollution on the species with whom we share our earth. And yet people still leave their rubbish behind in a field where wild animals graze.

Looking around the interwebnet for material on deer feeding in the Phoenix Park I came across some incredible examples of general idiocy. Here is a man feeding a buck with some sort of biscuit:

And here is ‘Dublin-based model’ Brittany Mason (whoever she is) delighting her 77,000 Instagram followers with her cute picture. She apparently ‘made friends with Bambi today’, carefully remembering to add her sponsor’s hashtag to the post.

I took these examples from a very good piece posted in 2016 on the Dublin Inquirer site, and there are many more horrifying pictures there.

One of the reasons why the trend has grown is because tourist guides and social media are encourgaing the practice. Here are a couple of examples I turned up:

Some proper research needs to be done on the effects of this rapid increase in feeding. According to a recent Mooney Goes Wild radio programme, where one Spanish student was found to be giving the deer popcorn, Laura Griffin from UCD is looking at the subject. I hope that this will be published soon, and perhaps then the OPW will take a much more active stance on prevention.

In the meantime, maybe people will realise that the deer are wild and really shouldn’t be approached. Particularly during the annual rut, which will start in a few weeks time. Here is a piece which appeared in the Irish Sun, written in the usual sniggery language we have grown to expect.

This is the scene in the Phoenix Park in Dublin less than 24 hours after ex-Hurricane Ophelia had the whole of the island of Ireland on red alert. Along Chesterfield Avenue, the main road through the park, there are many branches and a few whole trees down. Here, in the Oldtown wood area, a small beech tree has fallen to the ground. It doesn’t look to me as though it will pose any danger to anyone where it lies, so it will be interesting to see what the authorities do when they come round to assess it. Nearby, a large Scots pine has lain unmoved for nearly two years, since it fell victim to Storm Frank in December 2015. 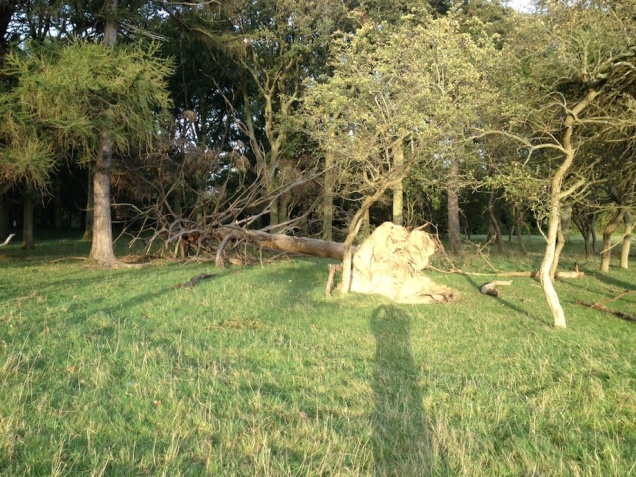 People regularly climb on this massive trunk and I’ve even seen dogs running along it. But it’s obviously been left to go through the same process of natural decay as it would do in a normal forest. A good way of increasing the biodiversity in the park.

Meanwhile the park’s resident herd of fallow deer are getting on with what matters to them most at this time of year, which is the rut. A hundred yards from the fallen tree a small group of hinds were hanging out with a single stag.

The stags started moving over to this side of the park a few weeks ago. Once the stags have sorted out a harem for themselves and mated with the hinds as they come into season, they will up sticks and move back to the other side of the park. By Christmas the all-male bachelor herd will be reformed. At the moment, it’s a bit like a teenage disco as the lads strut about bellowing and locking horns with each other in an attempt to impress the ladeez. The ones who don’t get a date sit around in the long grass looking forlorn.