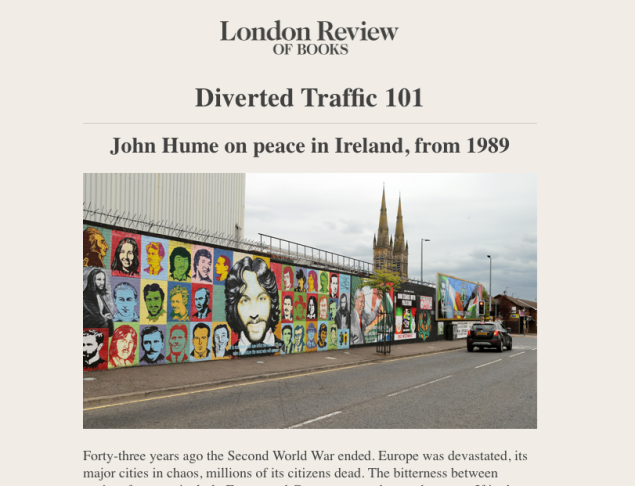 There are many tributes today to John Hume, whose death was announced this morning. The President of Ireland, Michael D Higgins, summed up his life in a well-crafted statement:

‘All of those who sought and worked for peace on our island of Ireland, and in the hearts of all, will have been deeply saddened by the passing of John Hume, Nobel Peace Laureate and Statesman.

John Hume, through his words, his astute diplomacy and willingness to listen to what was often difficult to accept but was the view of the ‘Other’, transformed and remodelled politics in Ireland, and the search for peace, with a personal bravery and leadership informed by a steadfast belief in the principles and values of genuine democracy.

John’s deep commitment to these values and his practical demonstration of tolerance and social justice, oftentimes in the face of strong opposition and tangible threats to his person and his family, asserted the fundamental principles of democracy. He and those others who helped usher in a discourse that enabled a new era of civil rights and responsive government that few would have thought possible, have placed generations in their debt, have been a source of hope.

That his efforts were recognised through the awarding of the 1998 Nobel Peace Prize brought great joy not only to his people in Derry, his colleagues in politics, particularly in the SDLP, but to a wider global set of colleagues and fellow advocates for peace abroad who held him in the greatest esteem and admiration.

Mar Uachtarán na hÉireann, as President of Ireland, may I say how deeply grateful we all should be that we had such a person as John Hume to create a light of hope in the most difficult of times.

It was Seamus Mallon, that other great statesman and courageous peace seeker and builder, who observed: “Inside was a man who had something big to do. There is a greatness about his political life in what he did and what he helped to do. I would put him in the same breath as Parnell and Daniel O Connell.”

We are grieving in this difficult year 2020 for two great apostles and seekers of peace.’

A fleet-footed move by the London Review of Books sent a remarkable 1989 article by Hume into their readers’ inboxes this morning. I’ve printed its 3891 words to read more carefully later but this trenchant paragraph stood out at first glance, and shows powerfully what he was up against at the time. It demonstrates the personal courage Hume showed in telling truth to the republican ‘movement’, armed to the teeth as they were:

For people who proclaim their Irishness and their pride in Ireland so loudly they are remarkably lacking in both the self-confidence and the guts to sit round and talk with their fellow Irishmen as a way of persuading them that this vision of Ireland is the best one. In particular, their decision to use guns and bombs to ‘persuade’ their Protestant fellow Irishmen is not only an extreme instance of lack of faith in their own beliefs or in the credibility of these beliefs: it is an indication of appalling moral cowardice and a deeply partitionist attitude. For its real effect is to deepen the essential divisions among the Irish people. There is not a single injustice in Northern Ireland today that justifies the taking of a single human life. What is more, the vast majority of the major injustices suffered not only by the Nationalist community but by the whole community are direct consequences of the IRA campaign. If I were to lead a civil rights campaign in Northern Ireland today, the main target would be the IRA. It is they who carry out the greatest infringements of human and civil rights, with their murders and bombings, their executions without trial, their kneecappings and punishment shootings. The most fundamental human right is the right to life. Who in Northern Ireland takes the most human lives?

(Incidentally, kudos should go to the LRB whose Diverted Traffic daily emails have been a welcome breath of air in these difficult times.)

A further demonstration of the international esteem in which Hume was held is shown by this photograph from 2014, taken when Congressman John Lewis, who also died in the last few weeks, visited Derry and walked arm-in-arm with Hume across its Peace Bridge. 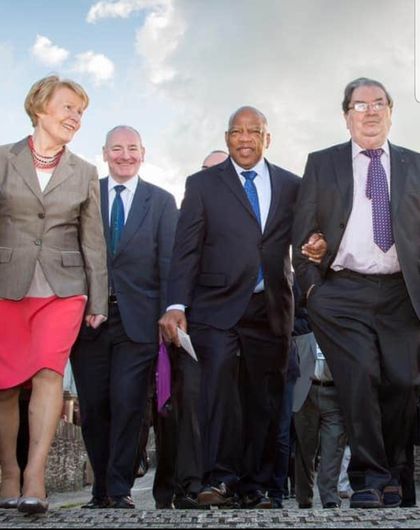 Hume did not do many public engagements at this stage in his life, but he made an exception to meet Lewis. That these two giants of the non-violent approach to politics should die with days of each other is a terrible loss to democracy. We must do all we can to ensure that their legacy lives on.