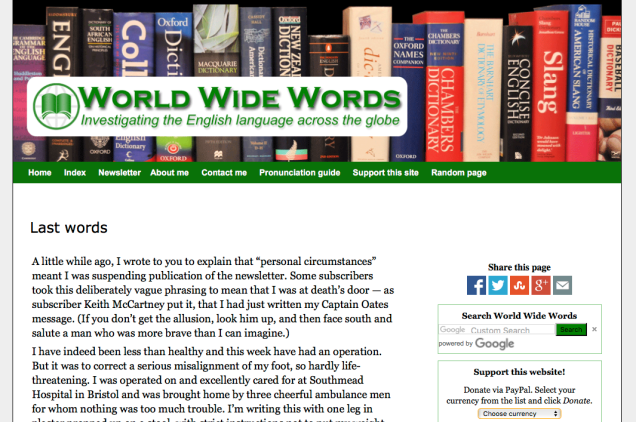 A month or so ago Michael Quinion, the founder and writer of the wonderful World Wide Words website, sent out a message to the 50,000+ subscribers to his free newsletter that he was suspending publication his newsletter, citing ‘personal circumstances’. It would seem that I was not the only person who took this as meaning that he was facing serious illness.
Happily, this wasn’t actually the case, as Quinion has reported this week. Although he has had a foot operation it was, in his words, ‘hardly life-threatening’, and he has come through it with a leg in plaster and instructions not to put any weight on it for a fortnight. He continues:

This has almost nothing to do with my decision to cease writing World Wide Words. Truth be told, after 930 issues I was becoming written out. Every week that passed made writing more of a chore and less of a pleasure. About a year ago, closure of the freelance reading programme of the Oxford English Dictionary, to which I had contributed since 1992, meant that I had lost a key stimulus for investigating and writing about new words and — more recently — access to the online OED. Cuts to local authority library services have very recently severed access to a key British Library newspaper database.
I began to think that somebody was trying to tell me it was time to stop.

The good news is that the WorldWideWords website will stay online, and will certainly be a resource for many years to come. Where else would one go to find out whether or not someone’s definition of a well known phrase or saying is actually codswallop? (Nothing to do with Hiram Codd, the 19th century purveyor of soft drinks, apparently.)
Those of us who toil in the back reaches of the interwebnet should salute Michael Quinion and thank him for the twenty years of wisdom and wit he has regularly dispatched to so many people. Good luck in the future. The project he is now taking on – the conservation, documentation and move of a recently closed local railway history museum – is surely in the safest of hands.

One thought on “Lost for Words”