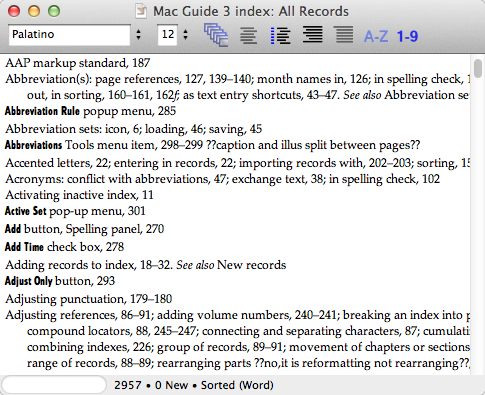 Today is National Indexing Day: a day of celebration for all those who are concerned with maintaining good standards in book editing and production.
Sam Leith in the Guardian has a nice piece about the subject, hailing the ‘unsung heroes of the publishing world’.
He spell out why an index is so vital:

the index is, in any nonfiction book, more useful than almost anything else in the apparatus. It is a map of the text; a cunningly devised series of magical shortcuts that can in the good case save a scholar many hours of work, and in the bad one save a bookshop-browsing cabinet minister from having to buy a former colleague’s memoirs.

The bean counters who run so many big publishers these days don’t, of course, always see it this way. If there has to be an index at all, then surely it could be generated by a computer? Similar arguments are often applied to the necessity of employing specialist copy-editors and proofreaders. Proper publishing needs all three, I say.
Leith also mentions the clever way some comic writers have used the index as part of their work. This has been highlighted in blogposts by the indexer and editor, Paula Clarke Bain, who is one of the driving forcers behind National Indexing Day (she has tweeted a dozen or more times already). A great example can be seen in the recent Alan Partridge book, Alan Partridge: Nomad, which contains gems such as: